Romance Of Their Own 2004 is a South Korean romance– action film directed by Kim Tae-kyun. Starring Kang Dong-won, Ju Han-sun and Lee Chung-ah

Romance Of Their Own Plot

Innocent young girl from the countryside due to her mannerism and appearance is how to describe Han-kyung. She moved to Seoul after her father’s death, leaving with her mother and half-siblings and to attend Kang-Shin High School is her plan now.

Her life in Seoul is a series of mental and physical shocks. On the bus, a slipper is thrown randomly at her head. The guy who threw the slipper is none other than Ban Hae-won, the most popular guy at her school, and everywhere he steps, girls trail behind. Seeing Han-kyeong’s pitiable and adorable nature, Hae-Won falls for her.

While the leader of Sung-Kwon High, Hae-won’s neighbor and rival, is named Jung Tae-sung. He, too, has feelings for Han-kyeong. Despite his shy, adorable face, Tae-sung has strong fists and endless obstinacy. A fight that handles both pride and love begins between the two, and neither of them is prepared to back down. But Tae-sung has a secret, one that forces him to love Han-kyeong in spite of himself, and Han-kyeong, ignorant of this, tries to do her best to be gentle with both of them. Eventually, Tae-sung leaves Han-kyeong’s side, and later, Han-kyeong and Hae-won learn of his secret.

Romance Of Their Own Cast

Watch Romance Of Their Own (2004) Full Movie Online 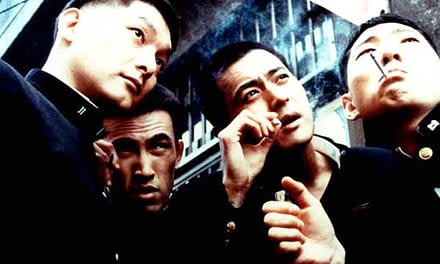